Mistress Simona had a disagreement with her slave. She did not mind debating sharply with him. But he crossed a boundary when he abused her. She was not going to condone it. The slave apologized profusely and promised never to do it again. She decided to give him a light punishment. So she had him lick her socks and she made him do the same to her sneakers before she let him go.

Madame Marissa likes punctuality. Her slave was not punctual and it pissed her off. But what made her mad was when he tried to use a shortcut to get to their destination faster and he ended up getting them lost. She could not make it to the event on time and she was mad. She crushed him with her sneakers and nearly ran him over with her car. She let him go after he had licked her dirty soles.

Lady Karame was teaching her friend how to humiliate. Her slave wanted a mild way to humiliate slaves and losers so she showed her. She brought a slave and showed her friend how to make him lick sweaty and smelly feet. The mistresses had their feet licked in turns and had fun chatting while the slave licked their sweaty feet. He was not given a break as they did it for hours.

Mistress Rose did not like how Clarissa had disrespected her. She had to make sure she would never do it again. So she made Clarissa lie down and she forced her to open her mouth. She filed her heels and soles as well as cut her nails and did all this into her mouth. She made her chew them and swallow. She made sure that Clarissa swallowed all of them.

Mistress Natasha caught her boyfriend sexting with another girl. She was angry but she did not show it. She pretended all was ok. She even dressed sexily in her lingerie and she teased him and he fell for it. She then humiliated him by making him lick the dirty soles of her high heels and told him she would crush him and trample on him with her high heels if he did not cooperate. He did.

This mistress loves to do the kind of things few mistresses have the guts to do. She knows how to improvise and she also loves to come up with new ways of doing things so today she decided to have her dirty soles licked clean by her slave. He also licked her feet and she used him as her human ashtray as she smoked. The slave wished the ground would open up and swallow him to save him from all that torture. 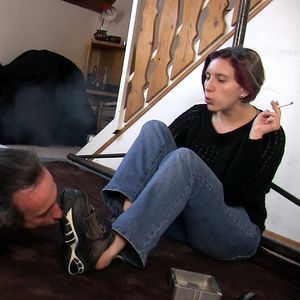 Mistresses use heels to humiliate slave

Mistress BlackDiamoond wanted to humiliate her slave so she called her friend and asked her to help her do it. The two mistresses had fun making the slave lick the soles of their heels. The mistresses forced the slave to also suck the heel part of the shoe and he did what he was told as he had no choice. He was lucky they did not trample him and crush him with the heels.

Princess Serena found out that her feet were smelly. She wanted to humiliate her feet and when she noticed her feet were stinking, she got an idea. She decided to use those feet to humiliate and punish her slave and that is what she did. She forced her slave to lick her feet as well as her shoes and the poor guy had no choice but to do what he was ordered.